I finished my first World Cup biathlon race! I was the 4th leg of our relay team at World Cup 6 in Antholz, Italy.

In the women’s relay event, each person skis a 2k loop, shoots prone, skis another 2k loop, shoots standing, and then skis a third 2k loop and tags off. For each shooting stage, in addition to the five bullets (“rounds”) in the magazine, you have three spare rounds you can load by hand if you need to. If you still have un-hit targets after using eight bullets, you have to ski the corresponding number of penalty laps. Spare rounds and penalty laps take a lot of time so it is best to try to hit all five targets on the first pass! In a typical biathlon race, the top teams have no penalty laps and few spares. On Sunday, however, there was strong gusting wind, and only one team out of 20 finished the race with no penalties. For anyone who is trying to decode the results: Clare Egan 0+3, 2+3 means I used all three spares in prone but did not have any penalty laps, and then used all three spares in standing and still had two penalty laps. 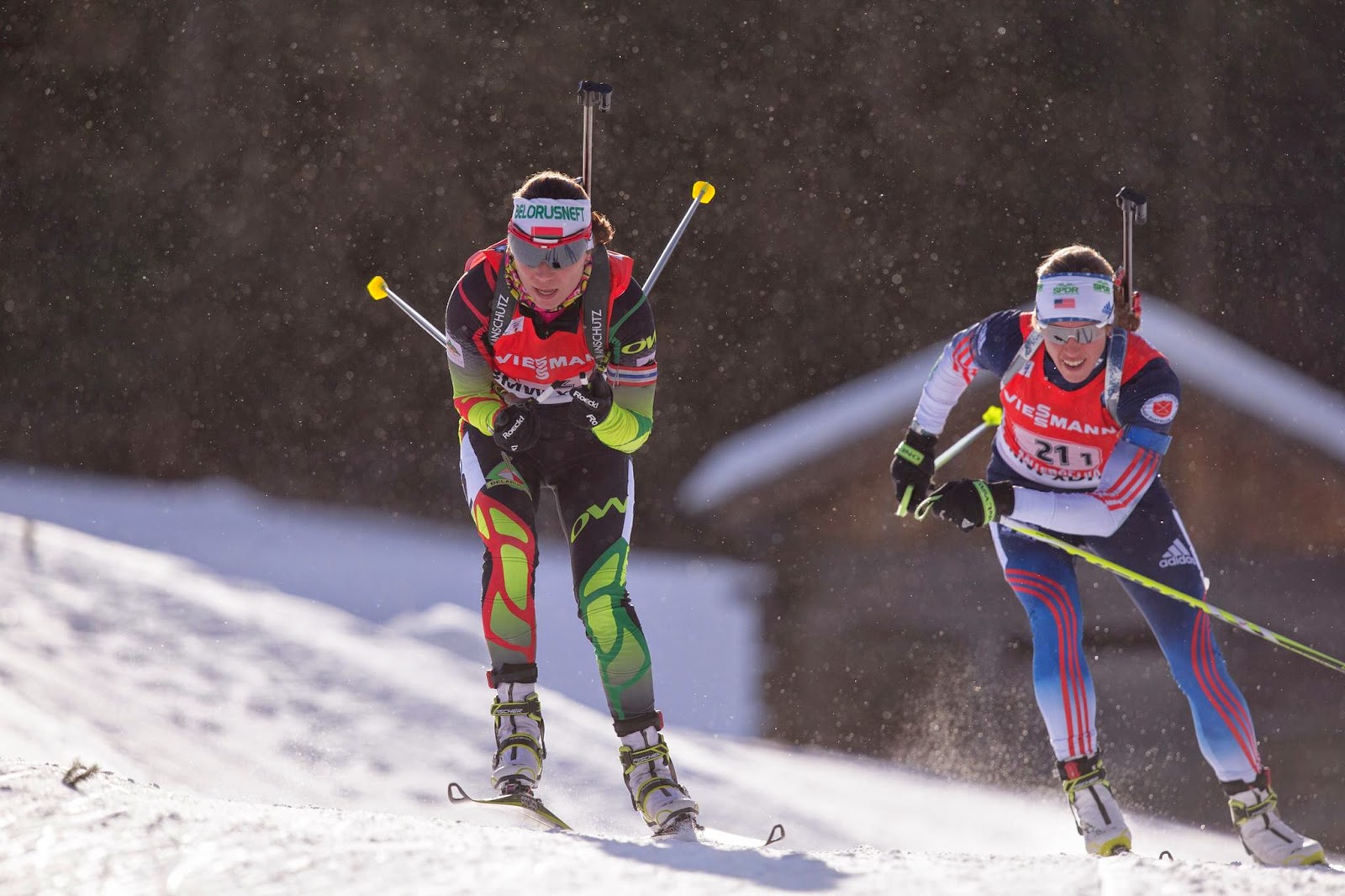 Susan Dunklee on course with a Bularussian

Susan Dunklee went first for our team. She shot 0+0, 0+3 (get it??) and skied the fastest ski time for the first leg, tagging off to Hannah Dreissigacker in 2nd place! Hannah shot 0+2 in prone but then got stuck on the range during a gale-force gust in standing and shot 3+3! She was on the range for almost two minutes, along with about ten other women, just waiting for the wind to die. A normal range time is more like 30 seconds. Hannah tagged off to our third skier, Annelies Cook, in 12th. Annelies shot 0+3, 0+1 and skied us up into 10th place, when she tagged me! 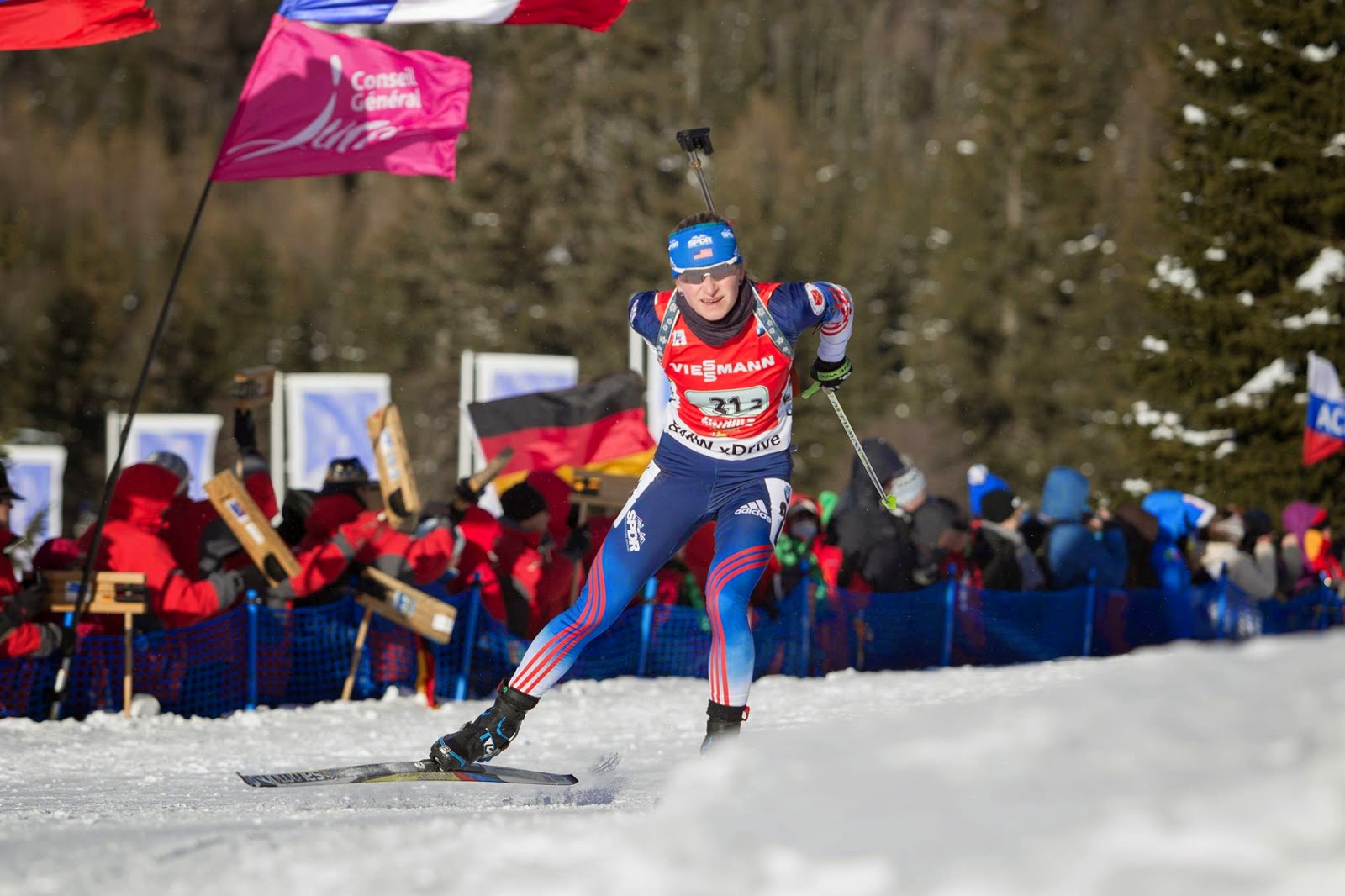 Hannah Dreissigacker with fans cheering on the hill 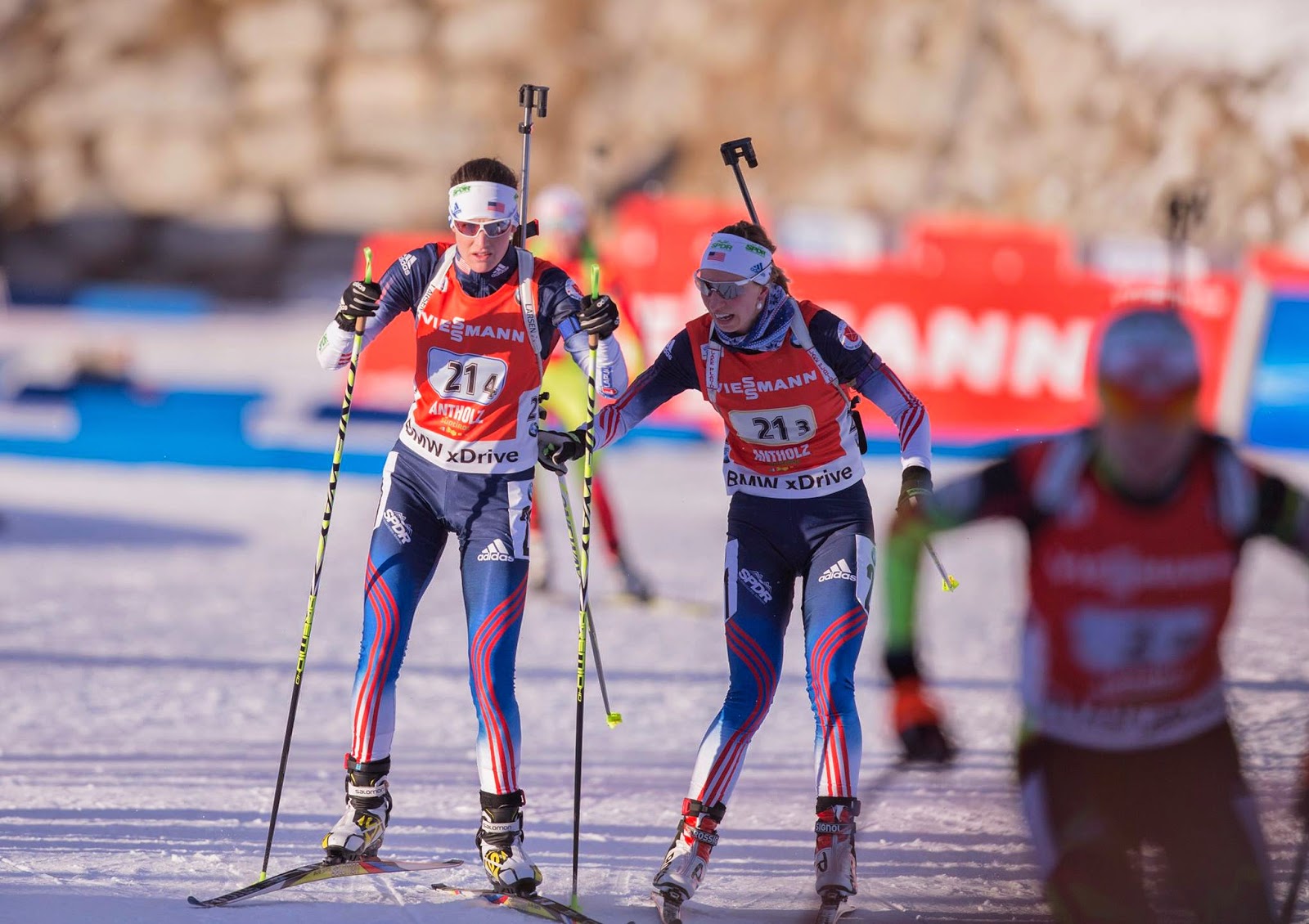 Annelies Cook tagging me in the exchange zone

I was psyched that I was keeping up with other skiers around me on my first loop. In prone I missed my first three shots! But then I hit my last two, as well as all three spares so I avoided going into the penalty loop. In standing, the opposite thing happened. I hit my first three shots, but then missed the next five, and had to go twice around the penalty loop. I was lucky when I first arrived on the range it was calm enough for me to get those three shots off and have hits. Then after that the wind picked up again and I couldn’t control the rifle. My last lap was hard, because I was alone on course. All the teams behind us had been lapped by the leaders so they were pulled out of the race and not allowed to finish, and all the spectators were already leaving. When I finished, my teammate Susan was waiting for me at the finish line and showed me where my warm clothes were and carried my stuff for me. Thank goodness for good teammates!

The whole World Cup experience was very positive and I am looking forward to racing at World Cups 7 & 8 in Nove Mesto, Czech Republic and Oslo, Norway. I think that I will fit right in.

If you read my most recent blog post “My First IBU Cup Race” you know that I was sick and did terribly. But biathlon is all about resilience, and in my second IBU Cup race, in Ridnaun, Italy, I hit every single one of my targets! That was an awesome first!

I had never hit all my standing targets in a race before, so to do that on a day when I also hit all my prone targets was pretty special. And do to it on a day when I really needed to– for my own sanity as well as my goal to qualify for the World Cup– meant even more. I came in 32nd, struggling to ski fast after being sick last week. But the ski speed will come back sooner or later, and in the meantime I qualified for the pursuit, which was my result goal for the day. I also finished within 15% time back from the leaders, which means I met the IBU’s qualification standard for the World Cup.

L-R Maddie Phaneuf, Me, and Kelsey Dickinson on the way to our race

After Friday’s clean sprint, Italy, I raced in a pursuit on Saturday, and a relay on Sunday. Unfortunately I did not have the same precision on the range, but I felt way better and faster skiing! Looking back on my first IBU Cup experience, there are a ton of things that could have gone better, but I am focussing on the clean shooting biathlon miracle. Here are a couple of pictures from Ridnaun:

So what now? Based on the results from two weekends of IBU Cup racing, the national team coaches decided to bring both Maddie Phaneuf and me to World Cup 6 in Antholz, Italy. That will be another awesome first for me! We will join US Biathlon Team veterans Susan Dunklee, Hannah Dreissigacker, and Annelies Cook. The US is allowed to start four women in any given race, so Maddie and I will each get one chance to compete. Maddie will race the sprint on Friday, from which the top 60 finishers qualify for the pursuit on Saturday, and then I will race in the relay on Sunday.

Maddie and I are the only two female members of the US Biathlon “X Team.” She is one of the top shooters in the US of any age, and one of the best biathletes in the world for her age: last year she placed 4th at World Junior Biathlon Championships. She is only 19 so she is focussing on preparing for another World Junior Championships this year, but she is also getting a taste for the World Cup. After racing well at IBU Cup 4 in Poland, she made her World Cup debut last week at World Cup 5 in Rupholding as a part of the women’s 4x6k relay.

I am keeping super high goals and super low expectations. My outlook for this sport goes beyond this weekend or this season, so every race is good practice for next time. My coaches are putting me on the “fast track”, giving me as much experience as possible at the highest level, and I am just trying to keep up. Of course I am trying to get better as fast as I can, but it just takes time. My first biathlon coach, Algis, said, “How to do you think you get better at standing with a rifle? Standing with a rifle!” People like me, whose lives revolve around trying to do something as fast as possible, are not often patient. Those who are make great biathletes!

My first IBU Cup race was not at all what I had in mind. Even though I was just starting to get over my cold and had only practiced once all week, I decided to race last Saturday because participating in the IBU Cup is such a big opportunity for me. But my ill-preparedness (and I mean ILL) showed: I got almost last place- 77th out of 83, hitting only five out of ten targets, clocking the 66th fastest course time and the 81st fastest (third slowest) shooting time. I am hopeful that this will go down in history as my most fantastically bad biathlon personal-worst, along with that one time I got third-to-last in a nordic Eastern Cup. Needless to say, my IBU Cup debut performance did not earn me starting rights on the World Cup. But I will compete again this weekend in Ridnaun, Italy and I hope that as a healthy athlete I can do significantly better and maybe earn that World Cup start.

In the meantime, I got some positive perspective from the experts: Susan Dunklee said that even when she has a minor cold she notices a drop in her shooting percentages. Shooting requires fine cerebral and physical work, so trying to perform well when your mind and body are even slightly under-responsive is extra challenging. “Head up and keep fighting” was another piece of wisdom from Susan, one which I know she lives by. Lowell Bailey reminded me that you have to play to win! He said that about his own race from last weekend, in which he too hit only half of his targets and finished 30th out of 30 in a really tough day on the World Cup. This is a guy who has been to the Olympics multiple times and stood on the World Cup podium. And Hannah Dreissigacker shared her own first-IBU experience with me: she apparently missed “a bazillion” targets (that’s gotta be at least 50%) one day, and cross-fired onto the wrong target the next. With the pressure of qualifying for the World Cup off her shoulders, she was able to look at each of her subsequent races as an opportunity for success rather than a chance at blowing it, and that’s when she started racing to her potential. Later that season she made her World Cup debut.

Sean McAnn, who works for the US Olympic Committee as a sports psychologist for precision shooters and biathletes, asked me, “What is your job?” My job is to perform well. Qualifying for the World Cup, or winning a medal, or whatever the result goal may be, comes as a result of performing well and not the other way around. So what are my keys to shooting well and skiing well? That is my homework for the foreseeable future!

I’m so grateful to have all these smart and experienced people to help me keep my head on straight. Maybe their wisdom will infiltrate your outlook and help you perform well, too.

PS. I apologize for the lack of photos but the Italian internet can’t handle it!

The racing season, of course! I am in Canmore, Alberta for my first biathlon races of the season. Since trials in October, I survived enough cold, rainy training days to fulfill my lifetime quota, and now I am enjoying some much-needed western sunshine. This is my second trip to Canmore, and first for racing. I came with the GRP two years ago for an October training trip on the “Frozen Thunder” man-made snow loop. Canmore is a sunny place, but very cold. It has been in the single-digits since I arrived last Sunday days ago, which I am viewing as acclimatization for my next racing destination: northern Minnesota.

Yesterday we took a trip into Banff National Park, where we skied on Moraine Lake Road. The road is closed in winter except to skier traffic, and it is lined with tall, snow-covered pines. There is a moraine lake at the end, but I’ve never made it all the way there. There are continuous gorgeous views of the Canadian Rockies, including this one featuring the Lake Louise alpine World Cup venue:

And here is a picture of Lake Louise, covered in snow:

Find info and results for the NorAm races this Saturday and Sunday, December 6 & 7, here.