World Championships- Anything Can Happen!

Today was an “anything can happen” kind of day. There was a pre-race blizzard that left fresh powder all over the trail for the early starters to plow through, and we were once again faced with strong, gusting winds. Even some of the best shooters missed a bunch, which sort of evened the playing field for people like me, who might miss a bunch either way. By the time I started with bib 70, thirty-five minutes after the first person, the snow had stopped and the tracks were slick and skied-in.

I missed my first two shots in prone, but hit the last three. After the race, when my coach showed me a picture of where my shots landed, I realized I was lucky to have hit any of them: I had a tight group right on the very left edge of the target, caused by strong wind moving from right to left. I did check the wind flags before shooting, and I thought it was the same as when I zeroed my rifle before the race, but it was stronger, and I should have adjusted my site.

Out on the course, the conditions were so much faster than they had been all week that I didn’t even know how to take some of the turns at high speed. The course here suits me because it has a few big hills, including one very long and steep one. I am not the strongest person out here (ha!) but I am light and I have a “big engine”. I also have been working with my coaches a lot this week on how to ski faster on the flats, and I think I did a good job of that today.

When I came in for standing I chose a point beside someone else, hoping they would block the wind for me a little, and I think it helped. I also got lucky and didn’t have major gusts like some of my competitors. I missed my second and fifth shots and then got going again. I thought for sure that with four misses I would be in like 90th place, so I was shocked when I heard one of my coaches yell “55th place!” Knowing that the top 60 qualify for the pursuit, I really started hammering!

When another coach yelled “35th” place, I was sure either I had misheard him or we were having a language barrier problem. But it turns out that with fast conditions and fast skis, I managed a top-40 course time, and when I combined that with a top-40 range time and 4 misses, I finished in 40th place! I guess I misheard the first coach, who actually said 35th too. The top 40 finishers earn “World Cup Points,” so today I earned ONE World Cup Point and am now officially ranked (last) (…among the ranked people!!!) on the overall World Cup Standings. 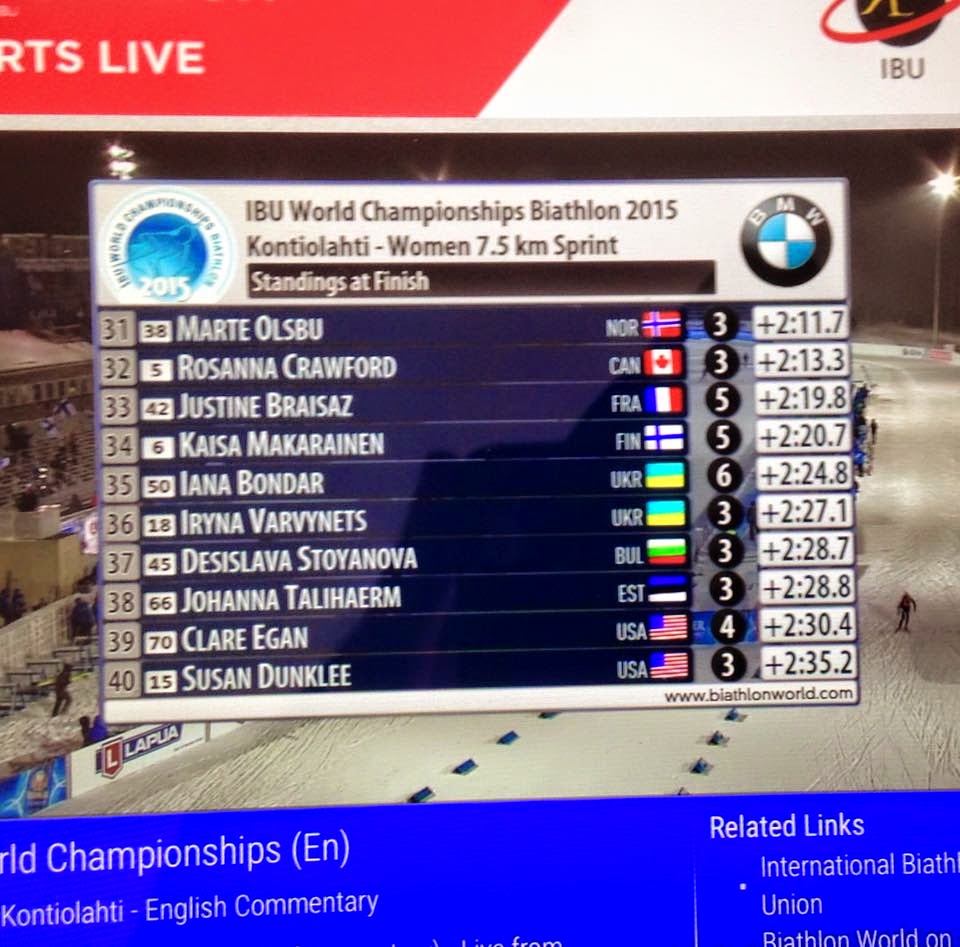 I had lots of people watching back home, including those who sent me these screen shots of the live feed. THANKS FOR WATCHING!!! Tomorrow’s race is at 17:00 local time, which, if I am not mistaken, after daylight savings time kicks in, will be 11am EST on Sunday morning.